X
Back to the top
X

The duo Valérie Sajdik (voice) and Cédric Chauveau (piano), unite in a singular musical universe two rich backgrounds of music and cultural crossbreeding. They present a first album that is characterized by their sense of melody and their taste for poetry.

In mainly English songs, but also some French ones, Valerie and Cedric tell stories of staggering tightrope walkers, sleepwalkers, dreamers of stars, drunkards in denial and Baudelaire’s dog who won’t let himself be done.

Since Valerie’s last album, “Les Nuits Blanches”, on which she sang her sleepless nights in the form of jazzy songs, some time has passed. The artist, who lives in the south of France and in Vienna, Austria, has not yet completely overcome her insomnia, and so new songs have emerged, for example during her concerts in New York at the legendary Cabaret Sabarsky with her Kurt Weill repertoire, as well as during her trips to France. Her musical accomplice, co-composer and arranger, is the French jazz pianist Cédric Chauveau, whose trio album “It’s only a Papermoon” was rated “Revelation” by the French Jazz Magazine.

After a musical roadtrip in different genres, Valerie has landed, without compromise and without net, with the album “Funambule”. The fact that life remains a tightrope act in this process is another question and constitutes the thematic arc of this album.

From her beginnings with the electronic jazz project “Saint Privat” to her solo hit “Regen”, where she was to be marketed as a variety starlet, one can always hear the love for jazz in all her songs. And in this album “Funambule”, she reconciles herself with her diversity and her supposed contradictions. With Cedric, she re-records her German hit “Regen” in a jazzy English version.

Masha Kaleko and her poem “Tightrope walker without a net” have been with her not only since she discovered Kaleko’s memorial plaque in New York’s East Village and experienced a very moving moment. At the end of the day, what matters is to be understood. And to understand oneself. The many facets of Valerie have their say, find a common denominator and thus form the most personal, harmonious and stylistically pure album of her career so far.

On the other hand, Cedric Chauveau’s career path is quite linear. Since his encounter with jazz, he has never stopped trying to deepen his musical expression, which is largely impregnated with blues, swing and gospel. However, he is not closed to other musical styles, quite the contrary, and is enriched by each experience. He likes to melt into the universe of the artists he accompanies and brings his sense of harmonization and humor. 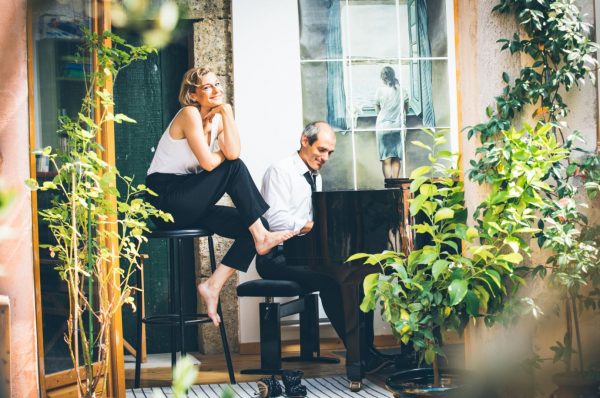